The most successful and diverse International Symposium on Online Journalism (ISOJ) to date concluded last weekend underlining a renewed sense of confidence and optimism in the future of the news industry.

More than 400 journalists, media executives and academics came to the University of Texas at Austin on April 4 and 5 to participate in the 15th edition of the global conference organized by the Knight Center for Journalism in the Americas. 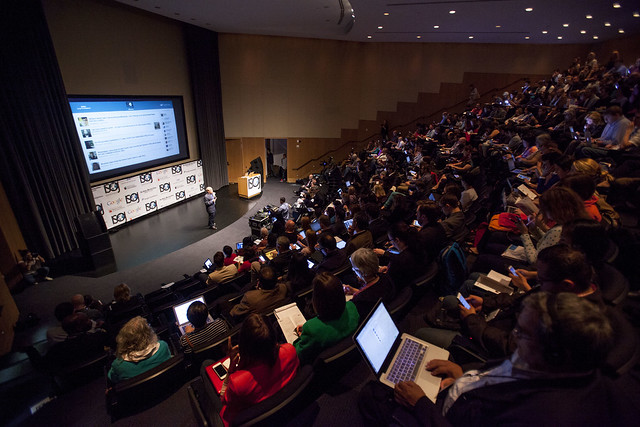 The two days of the event was streamed through live cast and the entire raw footage is now available through ISOJ’s website. In the next days, edited videos of the presentations will be posted on the ISOJ website to replace the raw video. Click here to read more stories on the panels and here to view video interviews with some of the panelists.

“We had a record-breaking ISOJ that was marked by optimism regarding the future of journalism in the digital age,” said Professor Rosental Calmon Alves, founder and director ofISOJ and of the Knight Center. “Since we started ISOJ in 1999, we have never had so many people, so many countries represented and such an optimistic tone on the direction the news industry is taking to face the challenges created by the Digital Revolution.”

This year’s conference had almost 70 panelists participating in 14 sessions that highlighted some of the most current issues and surfacing trends in digital journalism.

The event featured keynote speeches from two industry leaders: Vox Media’s Jim Bankoff, who spoke about the guiding principles that have made his company the fastest-growing media publisher in the U.S.; and The Washington Post’s Marty Baron, who argued that, after years of crisis and uncertainty, there is reason for optimism to return to newsrooms across the country.

Two leading academics were also keynote speakers during the conference: Hong Kong Journalism and Media Studies’ founder and director Ying Chan, who spike about the growth of internet penetration in China and the evolution of digital journalism in her country; and Jay Rosen, who talked about the state of journalism school programs and the need to bridge the gap between practical training and academic knowledge.

The event also marked the 10th anniversary of the research component of the conference. Since 2004, ISOJ has attracted academic researchers from around the world who submit papers for a blind review process. Since 2011, the conference has published #ISOJ, the official research journal of the event.

This year, #ISOJ published its fourth volume. Unlike other journals, #ISOJ is released at the conference, containing the main research papers that were presented during the event. With most research journals, months or years go by between the conferences where the papers are presented and their publication.

For the last 15 years, ISOJ has brought together the top journalists, media executives, researchers and academics in the field to discuss the latest trends, issues and innovations in online journalism. Last year, ISOJ attracted more than 350 participants from over 30 countries and focused on discussing the disruption of the news industry’s business models, multimedia storytelling, data visualization, and changes in web design architecture.

The ISOJ website contains videos and transcripts of all sessions of ISOJ since 1999, besides research papers, PowerPoint presentations and other materials. The site is open to the public as a unique repository of testimonials about the evolution of digital journalism.

This year’s ISOJ was supported by the Knight Foundation, The Dallas Morning News,Omidyar Network, Google, the Moody College of Communication at the University of Texas at Austin and Univision Noticias.