(Video of Stahl’s presentation at ISOJ2019 is below her bio, along with an article from the ISOJ team) 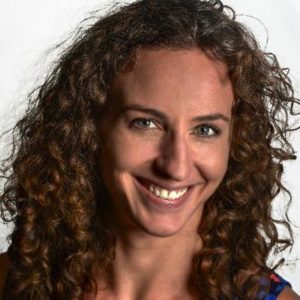 @jrstahl
Jessica Stahl is the director of audio at The Washington Post, where she oversees the newsroom’s content and strategy in podcasts, voice assistants and other audio storytelling. Under her direction, The Washington Post’s podcast operation has grown in size, reach and ambition. The most recent launch was Post Reports, The Post’s flagship daily news program.

Jessica has overseen the development and success of a range of original daily, weekly and mini-series programming like Can He Do That, Retropod and Constitutional. The Post was also among the first publishers to produce and monetize content for smart speakers.

Jessica started at The Post as an audience strategist, and previously oversaw a strikeforce team in the newsroom focused on developing targeted audience growth strategies and innovative multimedia content. Under her direction, that team won an Edward R. Murrow award for its work during the 2016 presidential election.

Before arriving at The Post, Jessica was the first social media editor at the Voice of America, developing strategies to reach and engage audiences around the world.

She is a graduate of Johns Hopkins SAIS and Princeton University and grew up on Long Island.

Stahl was part of the panel “Ok, Google, Alexa and Siri: Play the News. Can you really help journalism in the podcast boom?” at ISOJ 2019.