(Video of Botello’s presentation at ISOJ2019 is below his bio, along with an article from the ISOJ team) 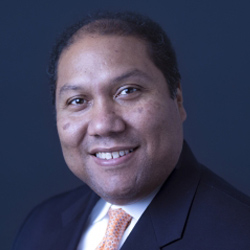 He worked for 10 years as ICFJ’s Latin American program director and launched ICFJ’s International Journalism Network (IJNet), an online media assistance news service. Under his leadership, ICFJ became the premier journalism organization in Latin America working in more than 20 countries in the region. He conducts a variety of training programs and conferences on digital media, mobile technology, ethics, press freedom and media development.

Luis is a regular international media analyst for major news networks such as CNN en Español, NTN 24 and Voice of America. An award-winning journalist, Luis previously served as morning newscast producer, host and television reporter for Televisora Nacional in his native Panama, where he covered assignments in Colombia, the United States and Europe. Luis also covered U.S. military operations in Latin America and political and labor issues in Panama.

He developed a sense of mission to promote high quality in-depth reporting when his work led to government threats because of his reporting. After facing those challenges working in Latin America, Luis became a strong advocate for press freedom and high standards in journalism leading him to a long career at ICFJ supporting journalism that holds governments accountable.

Luis is a member of the board of directors of the Fund for Investigative Journalism (FIJ), the Knight Center for Journalism in the Americas at the University of Texas at Austin and the Latin American Journalism Center (CELAP) in Panama City, Panama. He has taught at American University in Washington, D.C. He is a Fulbright Scholarship recipient. Luis also received a fellowship to Louisiana State University’s Manship School of Mass Communication. He has a B.A. in journalism and a M.A. in mass communications from Louisiana State University (LSU).

Botello spoke during the lightning presentations at ISOJ 2019.