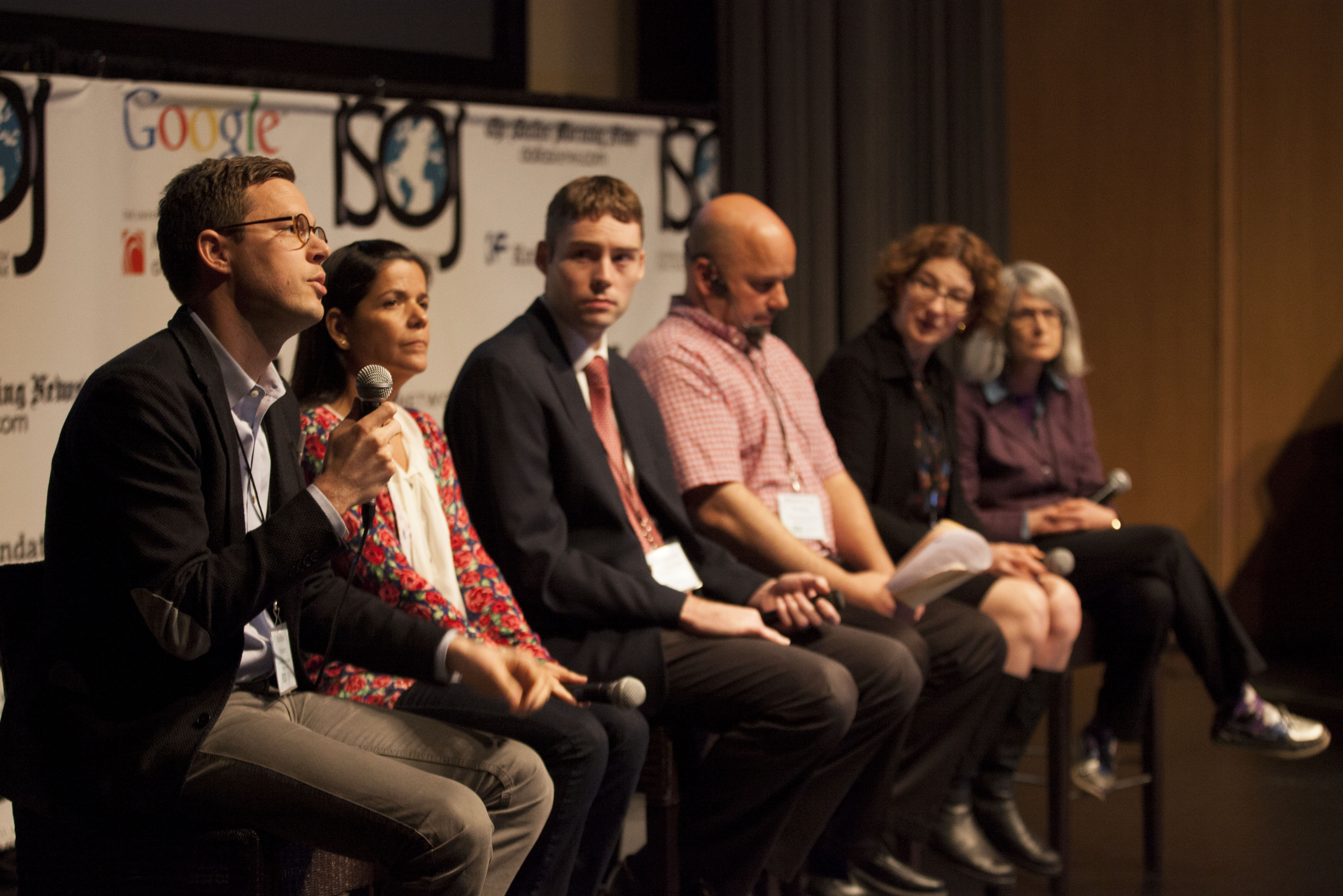 Matthew Powers, Adriana Barsotti, Logan Molyneux, Edward Kian, Lisa Lynch, and Jane Singer speak at the 2014 ISOJ on the University of Texas-Austin campus, Apr. 5, 2014. (Mengwen Cao/Knight Center)Journalism is changing quickly, but rather than looking at a general picture of this transformation, a group of scholars researched how this change happens differently to different places and organizations, presenting their results during the second day of the 15th International Symposium for Online Journalism.

This was Jane Singer’s observation about the research session and panel she moderated, titled “Emerging Journalistic Practices in the Digital Age,” which looked at how journalists and organizations were adapting to new technologies. Singer is a professor at City University London/University of Iowa.

When Lynch interviewed employees from the French-language La Presse between 2010 and 2013, she found a shift from a newspaper that didn’t know too much about the web to an iPad-centric publication that viewed tablets as the path to more advertisers and a more manageable workload. Anglophone newspaper The Gazette, by contrast, also focused more on digital publication but saw it as a distracting increase to their workload, still seeing themselves primarily as a print publication.

Edward Kian from Oklahoma State University noticed a similar difference in opinion to new media from sports journalists regarding Twitter specifically. Kian said the social network was a necessity for reporters covering this beat since approximately 49.7 percent of all tweets globally were related to sports events.

His research with colleague Ray Murray revealed that although sports journalists constantly used Twitter for work, most of the older reporters did not like interacting with their audience or fans, feeling like it was a waste of time. They also believed Twitter had “dumbed down” this particular brand of journalism by allowing anyone to report on sports, rather than only credible sources.

Molyneux said their research uncovered most journalists retweeted comments that were about them, whether positive or negative, in what seemed like an attempt to build a public image. Interviews with the journalists revealed they were trying different ways of doing so, from offering webinars to tweeting about other journalists to talking about their personal and professional lives.

“Most of this happens on social media,” Molyneux said. “Their goal is to connect with their audience and show that they really know what they’re talking about […] to establish their authority.”

Moving away from branding, Adriana Barsotti from Pontifica Universidade Catolica do Rio de Janeiro focused on the effect tablets and smartphones were having on news production in Brazil.

Although Brazilians were the fourth biggest users of smartphones in the world, content produced for that medium was no different from that produced for websites. Tablets, however, were seen as an entirely different medium that brought a multi-sensorial aspect to the experience of reading news by adding touch to the equation.

“This new language based on emotions and sensations seeks to entertain readers,” Barsotti said. “Infotainment is no longer as taboo as it used to be for many newspapers.”

She found examples of this by looking at tablet products released by Brazilian newspapers O Globo a Mais and Estadão Noite, which included an article about diet where readers could remove unhealthy food items from grocery carts with their fingers and a cover photo featuring a building in the middle of a storm that produced thunder sounds when touched.

Looking at a potential new model for journalism rather than digital tools, Matthew Powers from the University of Washington-Seattle looked at whether non-governmental organizations (NGOs) could produce good journalism. His research showed that although NGOs include an element of advocacy in the content they produce, for whatever issue they focus on, this emerges and depends on an initial empirical process of reporting facts.

“NGOs are not a panacea for the challenges facing journalism, but are a key component in the emerging world of international news productions and deserve our attention,” Powers said.