Journalists using tools from the future –like blockchain or augmented reality– to enhance, optimize and protect their stories

Watch video of the tech trends panel discussion from ISOJ 2018.

New technologies such as virtual reality, artificial intelligence and machine learning will be important for journalism in the future, and some news organizations are already using them, according to the members of the panel “What’s Next: Artificial intelligence, machine learning, blockchain, augmented reality and other tech trends that will impact journalism” from the 2018 International Symposium of Online Journalism (ISOJ). 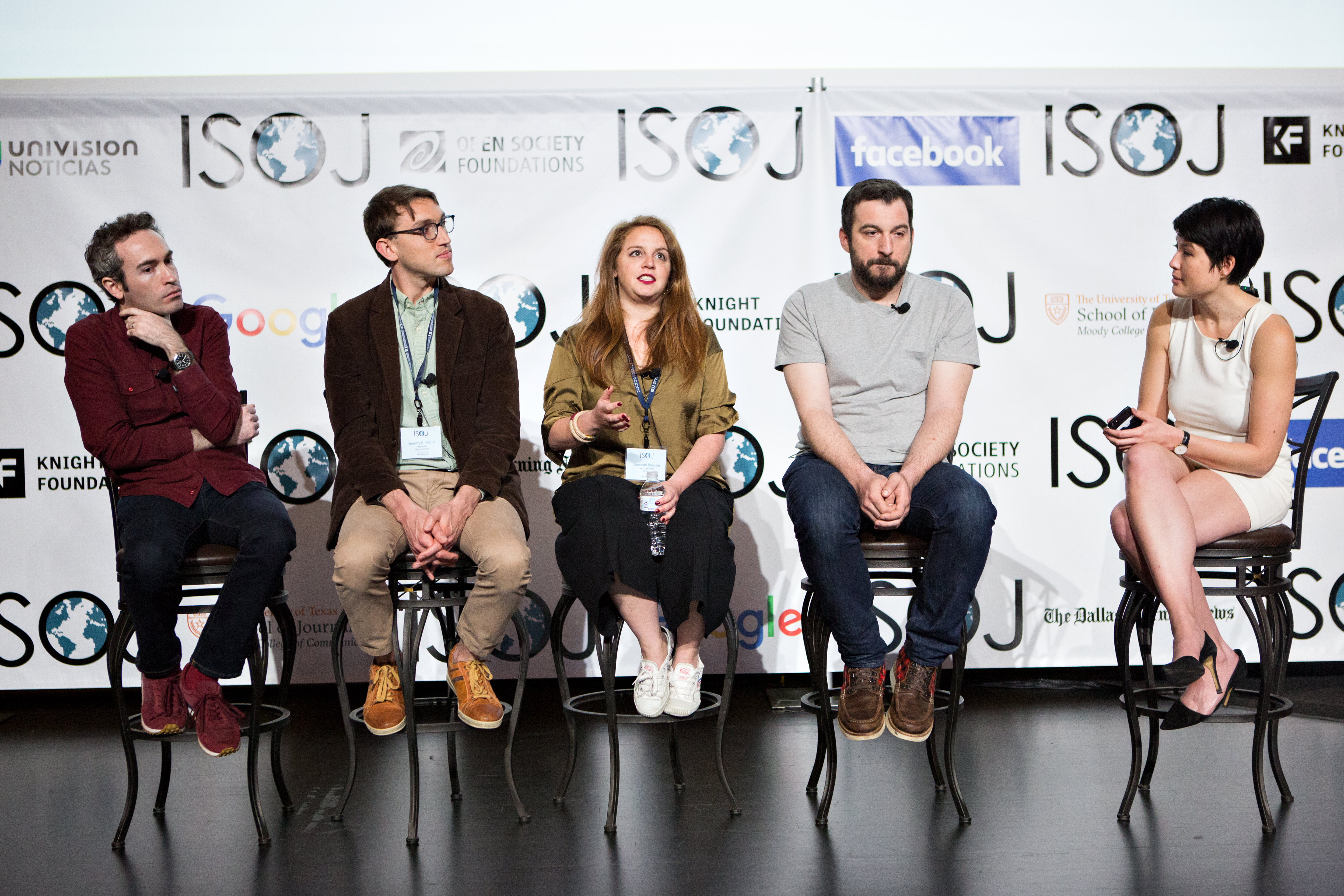 “We’re taking the virtual reality, and live compositing at the same time with the real reality that we’re filming,” Basckin said. “It takes virtually no post production, we’re not using any graphics or anything else.”

Basckin said that Left Field is an example of how virtual reality can be used as a tool, and not as a media’s main platform. The central idea of the project is to create content that is enriched with virtual reality, which results content that is more attractive for the audience than traditional broadcast pieces.

“The sky’s the limit,” she said. “We have taken a consumer product and made it work for us but still with a commitment to journalism and explaining things.”

Basckin mentioned that the resulting products of Left Field have immediacy, are attractive and can be used in live broadcasts, while at the same time they don’t require a big human team.

Augmented reality is on another spot along the virtual reality spectrum, and it is also starting to be applied to journalism. Zach Seward presented what they are currently doing at Quartz, where he works as executive editor. He said that augmented reality -which is defined as  a composite view that superimposes computer-generated objects on the real world- is having an important moment in communication.

“We see a slew of AR apps come out in the last six to 12 months. And I’m here to argue that this time, the third go around for AR, is for real,” Seward said.

“Experiencing [AR] merely requires the phone that is already in your pocket, and that in a nutshell explains what I believe is the real potential and why this is the moment for AR in our industry and in others,” Seward added.

Seward said that people are already using augmented reality to communicate with each other without realizing it, through apps such as Snapchat and Instagram. Therefore, media organizations have a huge opportunity in that field.

Seward showed the app that Quartz released two years ago for iOS and Android, which reads the news in a conversational interface through a mix of text, emojis, gifs and static images. They added virtual elements that the user can manipulate.

“The idea we had was what if we just thought of 3D models as yet another media type that we could put into the mix of our storytelling when it seemed appropriate,” Seward said.

The Quartz team has found that not all news requires augmented reality, and also that the topics that best work are those related to sports and space. Seward said that this technology works better with journalistic products that can be planned with enough time ahead of time.

As an example, Seward showed the 3D model that Quartz made of the Falcon Heavy space vehicle when it was launched in February this year. Users could put the spacecraft in a real environment, manipulate it and learn about it on their phone screens.

“It’s an instinctively sharable experience,” Seward said. “As we place these objects in the app, people would place them on unusual places where they were around the world, take a screenshot, and share it in social media.”

In the field of artificial intelligence, Jeremy Merrill, news apps developer at ProPublica, talked about how machine learning technology is useful for the investigative journalism.

Merrill defined machined learning as “fancy math that looks like magic,” whose main function is to find patterns among huge amounts of data.

“You are giving them a bunch of data that encodes some of your hypothesis about some sort of pattern that might exist, that you hope is meaningful,” Merrill said. “The answers about what patterns actually do exist in the data that you have are hoping to be useful for you in some way, for us is journalism, hopefully that means that we find something out about the world that we didn’t know before that the computer is telling us.”

For journalists, using machine learning represents having a computer do menial tasks that normally a bunch of interns would do, such as reading big amounts of documents, measuring and organizing data, according to Merrill.

Among the examples of journalism where machine learning was used, Merrill mentioned a piece in which BuzzFeed programmed computers to look for spy and drug dealers airplanes among hundreds of flight-tracking data over U.S. airspace.

He also highlighted an Atlanta Journal-Constitution story about sexual abuse at the hands of doctors, for which machine learning was used to analyze thousands of medical records looking for words that may indicate abuse.

On the negative side of the use of machine learning and artificial intelligence in journalism, Merrill mentioned that people are also using these technologies to manipulate videos and audio.

“It takes a couple of hours and 80 bucks to make one of these,” Merrill said. “Some of these trolls are going to find those 80 bucks somewhere and build one of these and try to fool you, and that’s really going to be a problem because you can’t rely on the fact that it is a video, because it may just be someone who applied these fancy computational techniques to generate some scary fake propaganda.”

Mia Tramz, editorial director of enterprise and immersive experiences at TIME magazine, presented the projects that the publication is doing through LifeVR, TIME’s platform that offers virtual reality experiences for its publications People, Sports Illustrated and InStyle.

She highlighted that the concept is based on the original mission statement of LIFE magazine’s founder Henry Luce, who talked about taking people to the moon, through shadows in the jungle and walking through walls, which they interpreted as experiences that could be brought to real life through virtual reality.

Tramz said that LifeVR has published 30 projects since it was launched in 2016. They include a livestream of the 2017 Solar Eclipse in the U.S., which got more than 5 million concurrent viewers.

The four-part virtual reality documentary “Capturing Everest,” which takes the viewer upwards from Everest’s based to the summit, earned LifeVR two Emmy nominations.

Also, LifeVR created a virtual reality educational experience for the 75 anniversary of Pearl Harbor, in which the user can experience the moments after the attack. Regardless of the nature of the topic, the creators decided not to include gory scenes, although that may leave out a layer of reality.

“[Virtual reality] is a very powerful medium, and we didn’t want to traumatize anybody,” Tramz said. “Those are choices that all of us will have to make when we work with this medium.”

“With each of these projects, that was very much taken into consideration in the distribution plan that we had for them,” Tramz said. “We had partnered with museums and high schools to bring these experiences to where the audience would be, instead of expecting people to watch them at home, trying to make them as publicly accessible as possible.”

Like with other new technologies that journalism can lean on, journalists should know which kind of information works with virtual reality and which doesn’t.

“VR and 360 video are not for every story,” Tramz said. “You really want to find the stories that lend themselves well to the format.”

Plagiarism and misuse of information on the Internet are challenges that journalism will still face in the future. A possible solution to that is Po.et, a system based on blockchain technology (the same technology behind bitcoin cryptocurrency) which works as a shared database, designed to track and protect the copyright and ownership of creative products in the digital world.

Po.et is an open source protocol and operates as a nonprofit. Its CEO, Jarrod Dicker, talked about how blockchain technology will impact journalism in the future.

The idea is that, when a journalist publishes any written or multimedia content online, Po.et will capture its metadata, timestamp it and store it in a blockchain block.

“[The block] is immutable, is there, it cannot be changed,” Dicker said. “The value of it is that is really the future of what an archive looks like.”

Dicker said that an important point for Po.et is the idea that journalistic content should be easily discovered, and for that it is necessary that the authors feel confident sharing their work on the internet without the fear of somebody misusing it.

“People have ideas that they want to syndicate and share around, but they are scared that if someone sees it they will copy it,” Dicker said. “That sort of idea keeps them from putting that information out there. So what we are doing is giving people faith and opportunity to know that they can put their work out there and know that it is safe.”