(Video of Basckin’s presentation at ISOJ2018 is below bio, along with article from ISOJ team) 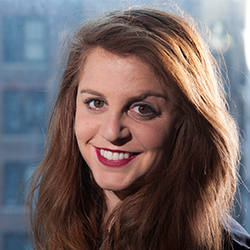 Twitter: @mfeoc
Deborah Basckin is a producer at NBC Left Field, an experimental digital video and innovation team. She is currently working on developing, producing and presenting a new series utilizing commercially available VR tools to create mixed-reality video. Previously she worked as a producer at the BBC – conceptualizing and producing content for TV, radio and digital projects from around the world for a global audience. Her work has covered the arts, international news, science and history. Originally from South Africa, she studied in Cape Town, LA and London, and has lived and worked in London, Amsterdam and New York.

Basckin was a presenter for the panel WHAT’S NEWS: Artificial intelligence, machine learning, blockchain, augmented reality and other tech trends that will impact journalism at ISOJ 2018 on Saturday, April 14 @ 9:45 a.m.