(Video of Filloux’s presentation at ISOJ2018 is below bio, along with article from ISOJ team) 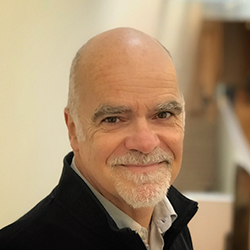 Frédéric Filloux is currently a John S. Knight Senior Research Fellow at Stanford University where he works on Deepnews.ai (formerly the News Quality Scoring Project). It is aimed at surfacing quality journalism from the web, in real time, at scale and automatically. By whitelisting numerous news sources and authors, the project will also address the Fake News problem. During the academic year 2016-2017, Frédéric was an International Journalism Fellow at the JSK, along with seventeen other media professionals selected for the program.

He is also the editor of the Monday Note, a newsletter / blog that covers digital business models and technology since 2007. His co-author is Jean-Louis Gassée, a tech investor based in Palo Alto. The Monday Note is now hosted by Medium and republished by Quartz. It reaches about 30,000 media professionals each week.

Prior to that, Frédéric spent four years as head of digital for Groupe Les Echos, France’s main business news provider. From 2007 until 2010, Frédéric was a working as an editor for the international division of the Norwegian media group Schibsted ASA. In 2002, he was part of the managing team that launched the free daily 20 Minutes, which became the most read newspaper in France. Before, he spent 12 years at Liberation, one of the most innovative French media at the time, successively as a business reporter, New York correspondent, editor of the multimedia section, manager of online operations, and finally, editor of the paper.

Frédéric is a board member of the Global Editors Network and Reporters sans Frontières (Reporters without Borders). He also has experience in the advertising business after a one-year stop at the Paris Groupe BDDP agency (now TBWA). He is a graduate from the Bordeaux school of Journalism.

Filloux was a presenter on the panel TRUST: Tools to Improve the Flow of Accurate Information at ISOJ 2018 on Friday, April 13 @ 1:45 p.m.