(Video of Warner’s discussion at ISOJ2018 is below bio, along with article from ISOJ team) 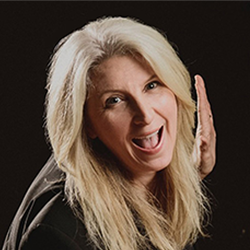 Twitter: @janinewarner
Janine Warner is an International Center for Journalists Knight Fellow and the executive director and co-founder of SembraMedia, a nonprofit dedicated to increasing the diversity of voices in Spanish by helping digital media entrepreneurs become more sustainable and successful. Janine began her career as a reporter and editor in Northern California. In 1998, her experience on the internet, combined with her fluency in Spanish, took her to The Miami Herald, as the Online Managing Editor. A year later, she was promoted to director of new media. She left The Herald to serve as director of Latin American operations for CNET Networks. Janine has written or coauthored more than 25 books, including Web Sites For Dummies and Global Mobile. She’s also created more than 200 hours of training videos for Lynda.com, CreativeLive, and other leading online training companies. She’s taught three MOOCs in Spanish for the Knight Center for Journalism in the Americas at the University of Texas, she’s been an adjunct faculty member at the University of Miami and the University of Southern California, and a guest lecturer at more than 30 universities in the U.S., Latin America, and Europe. Janine is a member of the TV Academy’s Interactive Media Peer Group and has served as a judge in the Interactive Emmy Awards, the Knight News Challenge, the Arroba de Oro Internet Awards, and the WSA Mobile & Content awards. Learn more at www.JanineWarner.com.

Warner was chair of the panel REVENUE: E-commerce, events, membership and the search for new revenue streams at ISOJ 2018 on Friday, April 13 @10:30 a.m.