(Video of Ibanga’s presentation at ISOJ2018 is below bio, along with article from ISOJ team) 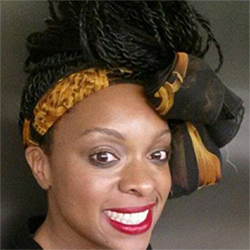 Twitter: @iiwrites
Imaeyen Ibanga is a senior producer and presenter with AJ+. She manages a talented team that produces long-form videos focused on contextualizing domestic and international news. Since she joined AJ+ in June 2017, the company’s YouTube channel has seen an increase in subscribers, watch time, and retention, thanks in part to her team’s weekly video productions. In February 2018, her team’s work expanded beyond its home on YouTube. They launched the show “Because Facts” on Facebook Watch to cover “the details that matter.”

Prior to AJ+, Imaeyen produced text stories, social media, and breaking news video stories during her tenures at NBC News, CNN, ABC News, and HLN. While at HLN she created the site’s digital video strategy and relaunched its YouTube channel.

Imaeyen is also a founding member of Advocates for Inclusion and is on the Online News Association’s board of directors.

She is the owner of the world’s best pet, an adorable curious kitty cat, Lady Snuggles.

Ibanga was a presenter on the panel VIDEO: Cracking the code for successful video online at ISOJ 2018 on Friday, April 13 @ 4:45 p.m.