(Video of Grigoryan’s presentation at ISOJ2018 is below bio, along with article from ISOJ team) 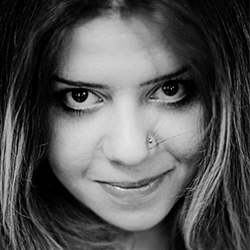 Twitter: @MedialabArmenia
Marianna Grigoryan, the co-founder/president of Umbrella Journalists’ International Network NGO (www.MediaLab.am, www.Daphne.am, www.Comics.am) is an investigative journalist, editor and media professional who has been actively engaged in journalism for more than 20 years. She has received over 20 professional prestigious international and local awards including “Press Freedom Award–Signal for Europe 2009”, for courage and good analytical reporting from Reporters Without Borders; “Free Press of Eastern Europe 2009” Award -Fritt Ord and ZEIT Foundation; Top Prize for Superior investigative environmental Journalism in Caucasus region 2007; ”Eastern Partnership Journalism Award 2012.” In 2017 she received the Amalya Kostanyan award from Transparency International and OSF for “Principled and courageous work/activity and significant contribution to civil society development.”

Umbrella Journalists’ International Network was founded due to the two international awards received by Marianna (Press Freedom Awards in 2009 – Reporters without Borders and Institusjonen Fritt Ord-Oslo and the ZEIT). Marianna, who aimed at developing quality journalism and providing an alternative source of information in the polarized media field of Armenia, invested the award money and her efforts in founding the NGO and the website Medialab.am.

In November 2015, Umbrella Journalists’ International Network launched a project to promote political cartooning in Armenia. The cartoons, which were initially supposed to be mainly political, raised numerous social problems and issues as well, including domestic violence, gender equality, equal opportunities, among others. The first and only comics project in Armenia had significant success as an alternative way of illustrating the situation and problems in and outside of Armenia. However, its great popularity and critical nature resulted in Marianna and her team receiving death threats and other attacks, including a burglary incident. In December 2017 MediaLab.am received the Media Excellence Award at the Universal Rights Awards in Yerevan.

Grigoryan was a presenter on the panel GLOBAL ROUNDUP: How news organizations are using satire online around the world at ISOJ 2018 on Saturday, April 14 @ 11:15 a.m.