(Video of Massucci’s presentation at ISOJ2018 is below bio, along with article from ISOJ team) 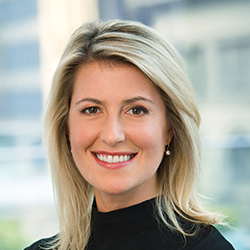 Twitter: @MindyMassucci
As the head of content for TicToc by Bloomberg, Mindy Massucci oversees the editorial strategy for the 24/7 global news network on Twitter. For the past seven years, Mindy was the head of global production, programming and operations for Bloomberg Television, overseeing a team of over 200 people across Bloomberg’s media hubs in New York, Washington, San Francisco, Sydney, Hong Kong, Dubai and London.

With nearly 20 years of broadcast operations and production experience, Mindy has been instrumental to Bloomberg Television’s ability to leverage its extensive resources of intelligence, data and and analysis across the company for its broadcast programming. She began her Bloomberg career as a desk assistant, quickly moving up the ladder to become the head of the assignment desk and then the head of global operations. Prior to her time at Bloomberg, Mindy worked at CNNfn and Fox News Channel. She is a graduate of East Stroudsburg University with a degree in Mass Communication and Technology.

Massucci was a presenter on the panel VIDEO: Cracking the code for successful video online at ISOJ 2018 on Friday, April 13 @ 4:45 p.m.