(Video of Glines’s presentation at ISOJ2018 is below bio, along with article from ISOJ team) 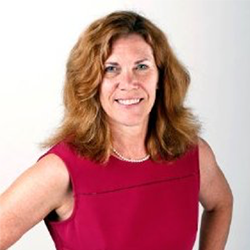 Twitter: @sglines2008
Sara Glines Sara Glines is president and publisher of The News & Observer in Raleigh, NC as well as regional publisher for McClatchy’s eight Carolina media outlets in Durham and Charlotte in North Carolina; Columbia, Rock Hill, Hilton Head, Beaufort and Myrtle Beach in South Carolina. She came to the Triangle in September 2016 after years as regional publisher with both Gannett and Digital First Media. She was also president & publisher of the York Daily Record from 2012 to 2016.

She has been an industry leader in transformational change most particularly in moving newspapers and magazines into the digital world to meet the ever-changing needs of the audience and the businesses they serve.

Sara was Editor-in-Chief of NJ.com, one of the first major digital-only news sites. She also led the transition of various national magazines, including Car & Driver, Woman’s Day, and Elle to their first Web sites and was in charge of moving Elle.com from its Paris beginnings to New York.

As vice president of interactive operations for Digital First Media, she worked with publishers and advertising directors at properties across the country to transition their newspaper-based sales operations into multi-media sales forces and develop and launch digital products aimed at helping local advertisers grow their businesses with both print and digital solutions.

Sara lives in Cary, NC with her husband John Kirkpatrick.

Glines was a presenter on the Keynote Panel: Newspapers in a post-advertising era at ISOJ 2018 on Friday, April 13 @8:45 a.m.