Yoani Sánchez will explain how and why she created 14ymedio, “Cuba’s first independent news platform”

Because of her desire to be an independent voice for Cuban society, Yoani Sánchez has been arrested, previously was prohibited from leaving her country and has been made the subject of smear campaigns. Despite those challenges, her independent news platform 14ymedio is approaching its second anniversary of delivering news and opinion from inside Cuba.

On April 16 at the 17th International Symposium on Online Journalism at the University of Texas at Austin, Sánchez will share her experiences at 14ymedio and discuss the current state of technology and journalism in Cuba. ISOJ is a global conference organized by the Knight Center for Journalism in the Americas. Registration is now closed, but live streaming of the event in English and Spanish will be available..

Yoani Sánchez started her personal blog Generación Y in 2007 and became a dissident voice for readers wanting to learn more about life in Cuba. Her influence abroad grew as her blog was translated into multiple languages.

In 2008, Sánchez was named as one of Time magazine’s 100 most influential people. In 2010, she captured the attention of U.S. President Barack Obama who participated in an email interview for Sánchez’s blog. Obama commended the efforts of Sánchez and other Cuban bloggers “to empower fellow Cubans to express themselves through the use of technology.”

In May 2014, she started 14ymedio, “Cuba’s first independent news platform.” What started as a team of a few journalists has morphed into a group of 11 reporters based inside and outside Cuba. The platform features national and international news on culture, politics, society, economics, sports, science and technology, and more. It also includes in-depth reporting and editorials.

“Our mission as an outlet is truly to inform and to create a space where every Cuban, inside and outside the island, no matter where they are, can find what’s happening, the reality of their country, during these times of transition,” said Alejandro González, who is in charge of growth and partnerships for 14ymedio.

González said the platform expands beyond Sánchez’s blog Generación Y by trying to create a new school of journalism inside a country dominated by state controlled media. This comes with greater responsibility of going beyond opinion and focusing on the facts, he said.

This task is not without its challenges.

The first identified by González is Internet connectivity.

While the availability of Internet on the island is improving, access at Internet cafes and WiFi hot spots in Cuba is still $2 an hour while average salaries range from $20 to $25 a month, according to CNN.

Additionally, all registered Cuban media is state-owned and subject to censorship. People living in Cuba receive an error message when they attempt to access 14ymedio. The platform’s reporters have been detained several times, González said. Additionally, the reporters’ access is restricted as they are not allowed to register for credentials for official press conferences.

The 14ymedio team has invested time, energy and resources to train and work with independent journalists, bloggers and citizen journalists to define journalism on the island, discuss responsible reporting, fact-checking, source identification and more, González said.

Despite these challenges, the team is growing and reporting from Cuba every day. At the same time, readers in the country are finding innovative ways to access and share the information.

News is produced and edited on the island and sent to team members outside Cuba via email, who then load it onto a Content Management System (CMS). 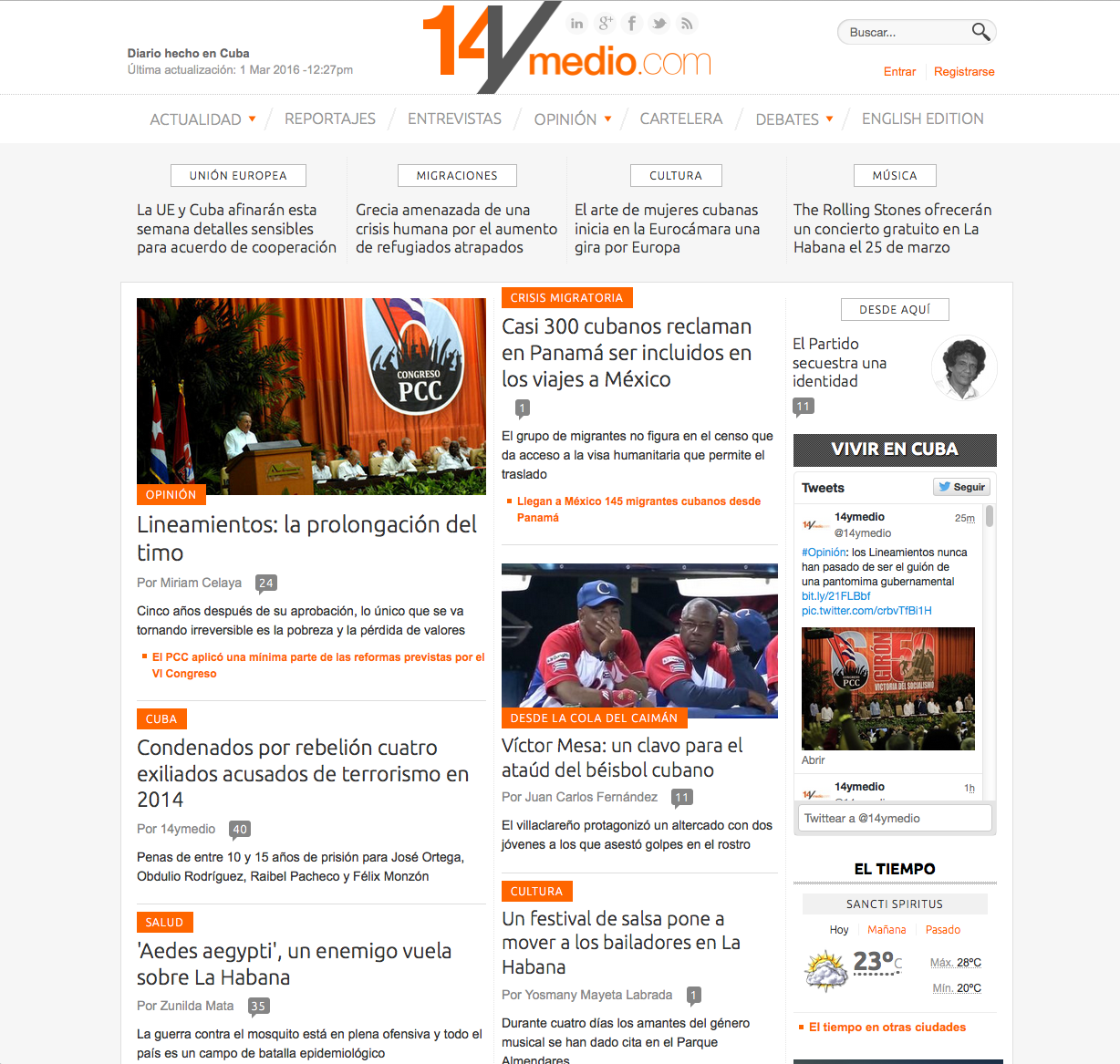 In Cuba, the news is distributed via email or accessed via proxies or social media, González said. Family members outside of Cuba may send articles to family inside the country. Each week, the site publishes a PDF version that can be shared via paquetes, which are collections of TV shows, movies, articles and other content uploaded to USB or hard drives. The paquetes have become a popular way for Cubans to share information.

The team at 14ymedio is looking to the future. This year, González said they plan to start incorporating audiovisual content through short videos and more pictures. They also plan to continue training, open an online news channel and grow their mobile presence with a mobile app for easier distribution, as many Cubans access the Internet via mobile phone. And, in efforts to become more sustainable, 14ymedio plans to open a subscription service for individuals and companies.

With ISOJ attendees, Sánchez will share her experience of creating an outlet in a place where press freedoms, Internet connectivity and the culture of independent journalism are limited.

She will look at the state of journalism in Cuba and how she views its future.

As more visible signs of normalized relations between the U.S. and Cuba appear, the futures of technology and journalism in Cuba are likely to see big changes in the coming years.