International research highlights differences among journalists’ methods, the precarious status of the profession and the evolution of a renown publication

Journalism was examined through a critical lens during the ISOJ 2018 research panel “Cultural change: Telling stories, shaping identity and normalizing precarity” on April 14.

Academics — American and European — delved into the evolving nature of journalism from individual journalists to major publications. 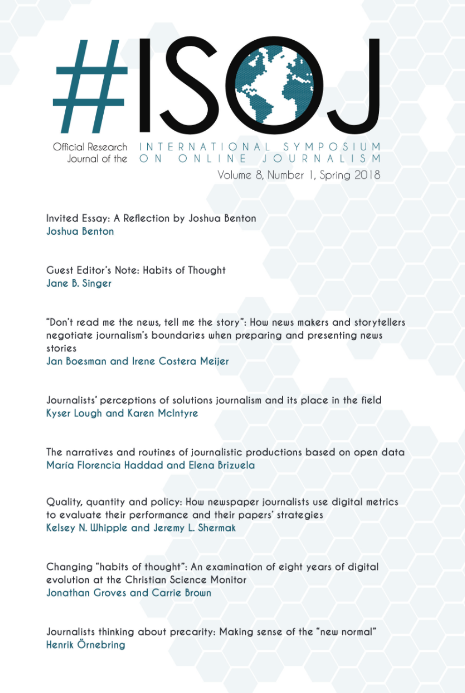 The panel started off with Jan Boesman, a postdoctoral researcher at the Journalism Studies department of the Vrije Universiteit Amsterdam (the Netherlands), and a lecturer in sports journalism at the University of Leuven (Belgium). Boesman presented his and Irene Costera Meijer’s research titled, “’Don’t read me the news, tell me the story’: How news makers and storytellers negotiate journalism’s boundaries when preparing and presenting news stories.”

“The prototypical newsmaker works for a certain news beat,” Boesman said. “He works on daily stories. He seldom leaves the news desk, (and) he is calling the whole day. He’s very active on social media, and he does his stories in a rather traditional, conventional way using the (inverted) pyramid style.”

“These journalists are not specialized in a certain topic,” he said. “They could write about politics, sports, about whatever. The form was more important for them than the topic. These journalists don’t like to be in the newsroom. They want to be in the field because that is where good stories are found.”

One of the main findings from Boesman and Meijer’s research is that news makers and storytellers prepare their stories differently. News makers rely more on predefining story angles, meaning they approach a story with a strong idea of what it will be about. Storytellers, however, distance themselves from this method, Boesman said, afraid such a practice would impede the story gathering process.

“The stories of the news makers have more of a prudeful outlook because they use conventional styles, but if you look at the news production process you could argue that the stories of the storytellers are actually more open-minded,” Boesman said.

The next presentation, from Henrik Örnebring, focused on journalists’ precarious working conditions.

Örnebring, of Karlstad University in Sweden, presented his research “Journalists thinking about precarity: Making sense of the ‘new normal,’” educating the audience about the apprehensiveness that has become associated with the field of journalism.

One of the defining features in journalism today is that their are less jobs. Journalists tend to specialize in various things in order to keep up with an evolving field, according to his research.

Örnebring credited British sociologist Guy Standing when defining precarity, making note that precarity not involves economic or material insecurity, but also how this insecurity makes one think and feel.

Örnebring found that young journalists feel the need to be entrepreneurial, which is a sign of precarity because they are taking individual responsibility for their own career trajectory.

“These young professionals were consumed about how to get a job, but getting a job was just a means to an end,” he said.

One of main points Örnebring made in his conclusion is that journalists are primed for precarity, especially emerging journalists who are trying to enter the field and are afraid of a lack of stability. This precarious climate can eventually affect the quality of journalism, he added.

“If journalism can only be practiced by the people who can afford to work for free, then what kind of journalism do we get?” Örnebring asked.

Carrie Brown, of City University of New York and Jonathan Groves, of Drury University, returned to previous research with “Changing ‘Habits of Thought’: An examination of eight years of digital evolution at the Christian Science Monitor.”

“There’s a story to be told here of a willingness to change and evolve although not certainly without resistance and in some cases too fast, not necessarily giving enough time to an initiative to allow it to really work,” Brown said.

Brown and Groves’ research focused on business and editorial efforts that did and did not work for the Christian Science Monitor, a Pulitzer prize-winning publication, over a nine-year period. Their research also focused on a change at the Monitor after the subsidy the paper received from the Church of Christ, Scientist, was reduced.

Brown discussed the four biggest changes at the Monitor, such as embracing experimentation and breaking down the wall between business and editorial.

The Monitor experimented with developing personas for its audience to identify their audience’s needs, she said. However, this provided little help since the Monitor elimianted comments from readers and did not take part enough in crowdsourcing.

The Monitor also dabbled in increasing communication between the editorial and business sides of the online publication. New verticals, such as Passcode and Monitor Global Outlook, helped to grow revenue, but eventually they decided to get rid of them and go in a new direction.

Brown said The Monitor continuously implemented new ideas to try to make up for financial losses, while trying to keep true to their mission and grow their audience.

As the media landscape and the culture of journalism continues to change, publications and journalists must still remember they may need to adapt and change as well, she said.