Covering an online president: White House press corps in the age of Twitter 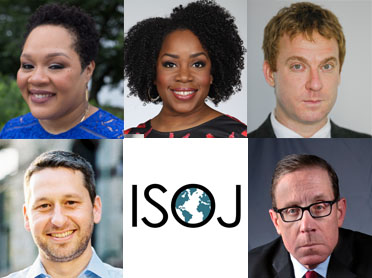 What’s it like to cover a president who bypasses traditional modes of communication and breaks news on Twitter? How do White House correspondents navigate this new normal, and what challenges does it present to their jobs and the public’s access to information?

These are some of the questions we’ll explore during the ISOJ panel, “Covering an online president: White House press corps in the age of Twitter.”

Texas Tribune CEO and co-founder Evan Smith will moderate the panel, which will be held on Saturday, April 13, from 4:45 to 6 p.m. The panel will be the grand finale of the 20th anniversary of ISOJ, which will take place April 12-13 at the University of Texas at Austin’s Blanton Museum of Art. (You can view the program here.)

Smith will be joined by an all-star lineup of White House correspondents:

The panelists will talk about their experiences covering a president who refers to the press as the “enemy of the people,” and will share insights into how the role of White House correspondents has evolved in the digital age and under the Trump administration.

“This is a very different time to be doing this job than a decade ago,” Smith said. “There’s no question in my mind that this president’s reliance on Twitter and on communications of a nontraditional variety have changed the calculation that news organizations make in terms of holding him accountable, and in terms of reporting on what he does.”

Smith said he hopes attendees will come away with a better understanding of how the relationship between politicians and the press is changing — and why it matters not just for newsrooms but for society as a whole.

“The reality is, we’re living in a world where increasingly the tension between the press and the White House is at a heightened point, and it’s a defining feature of everything that we do and everything we as citizens see in the world,” Smith said. “The more we understand how that relationship has evolved, and the more we understand the challenges of covering a White House like this, the more we can understand the impediments to thoughtful citizenship or threats to democracy.”

The panel’s focus — covering an online president in the age of Twitter — dovetails with other panel discussions we’ll be having at this year’s ISOJ, where we’ll reflect on the evolution of online journalism over the past two decades and explore what’s in store.

“For 20 years, we have been following the build-up of online journalism in the United States and around the world,” said ISOJ founder and chair Rosental Alves. “For the first time, we have an online president, who is always on Twitter, who has changed the dynamics of the White House’s relationship with the press, sometimes in such a hostile way. So it is natural that we conceived this panel and are bringing reporters from the White House press corps to discuss this new situation with Evan Smith, a leader of journalism in Texas. I can’t wait for this fascinating session, which will be a grand finale of the 20th ISOJ.”

ISOJ takes place from April 12 to 13, 2019 at the Blanton Museum of Art on the campus of the University of Texas at Austin, and features journalists, media executives, scholars and students from around the world.